(2) The Rest Of The Gang : Chris Warren. Jr as Zeke Baylor 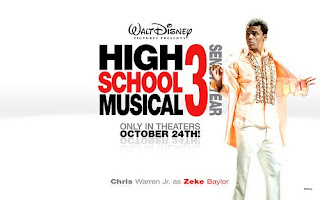 Zeke Baylor
well, you must be know about, Troy, Gabriela, Sharpay and Ryan. but wanna bout the rest of the gang? are you know them? well, now im gonna tell you about them!
Zeke Baylor is one of East High's most talented basketball players. He appears to be very close to Jason Cross, Troy Bolton and Chad Danforth. He also is attracted to Sharpay Evans. In High School Musical, he is one of several students to Reveal a secret passion following Troy Bolton's audition for the school musical. Zeke's passion is baking, which impresses Sharpay at the end of the film. In High School Musical 2, Zeke is one of many East High students to be hired to work at Sharpay's family's country club, Lava Springs. He assists Chef Michael in the kitchen. His crush on Sharpay still remains, but the two are not seen together until the end of the film. In High School Musical 3: Senior Year, Zeke asks Sharpay to prom.
Chris Warren, Jr.. portrays Zeke in the first three High School Musical films. Although his character graduates in the third film, Warren stated after High School Musical 2 that he planned to appear in two more Sequels, indicating possible involvement in High School Musical 4: East Meets West.

Chris Warren Jr.. (born January 15, 1990) is an American actor, who is best known for playing Zeke in Disney's High School Musical trilogy
Warren was born in Indianapolis, Indiana. He comes from an acting family. His parents are actors Christopher Warren (Lincoln Heights) and Brook Kerr (Passions). Warren attended Chaminade High School in West Hills, California where he was a running back on the football team. He won the "all league linebacker" in 2006 & 2007 on defense.
Diposting oleh hsmwildcats di 06.12