(4) The Rest Of The Gang: Kaycee Stroh as Martha Cox 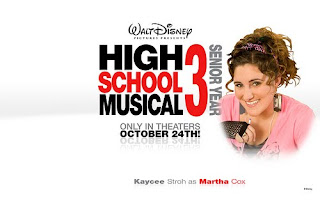 well, you must be know about troy, gabriella, sharpay and ryan. but wanna bout' the rest of the gang? are you know them? well, im gonna tell you about them!

Kaycee Stroh (born May 29, 1984) is an American actress, singer and dancer, best known for her roles in the hit Disney Channel Original Movies, High School Musical, High School Musical 2 and High School Musical 3: Senior Year.
Stroh was born in Salt Lake City, Utah. She has two older sisters, both of whom were dancers.
In an interview with People, Stroh discussed her obesity and heavy weight gain and being bed-ridden for three months due to a blood clot in her calf after knee surgery. As well as her television roles, Stroh is also an advocate for Make-a-Wish Foundation, United Cerebal Palsy and Starlight Starbright Children's Foundation.
Stroh married Ben Higginson on January 9, 2009 in the Salt Lake Temple of The Church of Jesus Christ of Latter-day Saints. Zac Efron, Vanessa Hudgens, Lucas Grabeel, Monique Coleman, Olesya Rulin, Chris Warren Jr., Ryne Sanborn and Kenny Ortega all attended the ring ceremony and reception.

Stroh appeared in High School Musical, High School Musical 2 and High School Musical 3 as smart girl Martha Cox, who secretly loved to "pop & lock & jam & break". A professional dance instructor at the Thompson Lane Entertainment Center, her role in the franchise materialized when she took her students to the auditions herself. Along with her fellow cast for the movie, she appeared at the Teen Choice Awards to accept an honorary award charting the film's instant success and at the 2007 American Music Awards accepting the award for Favorite Album. Stroh also serves as co-host for the dance-along version of High School Musical 2.
She also has a recurring role in the Disney Channel Original Series, The Suite Life of Zack and Cody as Leslie, a girl who played on the same volleyball team as main characters of the show, London and Maddie.
She has also been a guest editor for Tiger Beat magazine.
Stroh was also a member of the supporting cast in a direct-to-DVD musical story from Liken the Scriptures called Ammon & King Lamoni.
Because of her largeness, she has worked on occasion as a spokesperson and plus size model for the online retailer Torrid.
Stroh reprised her role as Martha Cox in High School Musical 3: Senior Year, released in October 24, 2008.
On September 22, 2009, Stroh is confirmed to be in Season 7 of Celebrity Fit Club.